In Austrian physicist Erwin Schrödinger’s famous 1935 thought experiment – a cat is placed within a box, containing toxic radioactive atomic particles, and is said to be simultaneously both dead and alive, depending on a series of random events, which may or may not occur.

So what do Schrödinger and his famous hypothetical cat have to do with Liverpool City Council and LOBO loans, you might ask…?

Well firstly there is the Cat, or Wolf to be precise – ‘LOBO’ – an acronym for Lender Option, Borrower Option loans being Spanish for ‘Wolf’.

Next comes the poison, toxic derivatives – in this case derivatives sneaked by banks and advisors like CAPITA, inside an innocent looking bank loan [or box], which doesn’t do what it says it does on the shiny new labelling outside of the box.

In Schrödinger’s experiment, having been exposed to the poison – for a period the cat is said to be simultaneously both dead and alive – as the poison and its toxic derivatives take lethal effect.

A useful analogy for councils like Liverpool and Newham suffering the dual effects of savage Government austerity cuts and rampant bank ‘mis-selling.’

The ultimate fate of Schrödinger’s cat within the box can only be determined however, when a plucky outside observer looks inside the box, to see if the cat is indeed alive or dead… . 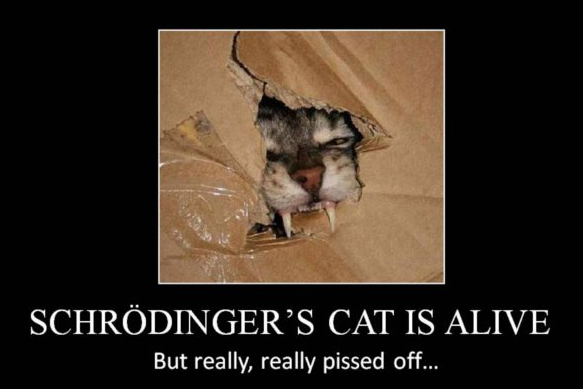 It is only through the use of FOI, Debt Resistance UK have been able to look inside the box of derivative laced LOBO loans, and observe the toxic effects of the LOBO loan poison, afflicting councils like Liverpool, Kent, Cornwall and Newham.

The LOBO loan or cat within Schrödinger’s box can only exist in the first place, if the LOBO loan could be proven demonstrably cheaper at the time of purchase – than council borrowing from their usual source of funding – Government Public Works Loan Board (PWLB).

At a recent Audit and Governance Committee meeting on 22/09/2016, Liverpool Council Finance Director Becky Hellard assured councillors that the 8 LOBO loans entered into by the council were indeed better value for money than equivalent PWLB loans.

Yet when the Liverpool Council Press Office were contacted regarding this matter – they came back with the following seemingly contradictory response:

“In making the statement relating to exiting LOBO loans Ms Hellard was referring to The Audited Statement of Accounts Report 2015/16 which states that “ any lender option to increase rates could be met by the City Council exiting the arrangement with no penalty”. This refers to a specific situation where the lender has exercised the option to increase rates or exit the loan. In this situation the City Council would exercise the borrower option and look to refinance the loan at a lower rate. An example of this is where the City Council took the borrower option on a £30m LOBO loan taken out at 3.82% over 60 years which was repaid shortly after the first option date in 2011. The saving to the City Council by refinancing the loan was £0.850m per annum for 10 years rising to £0.920m for the remaining years.”

Like Schrödinger’s poisoned cat – both alive and dead at the same time – Liverpool claim that:

How can these statements both be true? Crucially, this is where the toxic derivatives poison comes in.

LOBO loans contain a series of “options” over the 60-70 year term of the loan, and these options, allow the lender (the bank), to increase the interest rate payable on the loan.

This allows the bank to offer the councils a loan with a short-term “teaser rate” (or discount rate) slightly below the Government rate.

This charade means that the loan is both cheaper than the Government rate (at the time the loan was signed) and yet more expensive overall, when measured with the future rate-rise factored in, over the 60-70 year contract term.

Councils, in signing on to LOBO Loans, can only do so by ignoring the long-term realities of their decisions.

Once the teaser rate (usually only 2-5 years) ends, the options embedded within the loan allow the bank to increase the interest rate, often to a rate above the PWLB rate, available at the time the loan was entered into.

Liverpool Council entered its LOBO loan contracts between 2006 and 2007, but the first option/ step up dates on its LOBO loans were not until April, May and July of 2016, some ten years after the contracts were signed.

After sitting patiently in its box for a decade, slumbering Shroedinger’s cat has become restless. The first three vials of derivatives have been cracked open – and the cat is slowly reacting to the toxic poison.

A further 5 vials of poison await Liverpool Council, with first option/ step up dates of between May 2018, and January 2020.

To complicate matters further, since the 2008 financial crisis, interests rates have plunged to historic lows, with Bank of England base rates at just 0.25% and the 3 month LIBOR interest rate currently at 0.37% interest.

Current loan rates for councils to borrow from the Public Works Loan Board are between 1.0% and 2.3% depending on the duration of borrowing.

That means current rates of interest on Liverpool’s LOBO loans (between 3.7% and 4.9%) are – at least double the rate Liverpool would pay, were the council able to refinance the loans today.

Sadly for Schrödinger’s cat this makes escaping from his derivatives laced box all the more costly – with exit penalties on the LOBO loans almost double the amount of the original loan value. The more interest rates drop, the more difficult and costly escaping becomes.

According to CAPITA – the current “reward” payable to the banks for the return of  Schrödinger’s cat is £301 million – £130 million more than his original purchase price, and it could top £400m.

Will the toxic derivatives poison ultimately prove fatal? Only time will tell, but for now, Liverpool City Council – like Schrödinger’s cat, is both alive and dead.