When funds are not sufficient to run and maintain services or when there is the need to develop new infrastructure, Local Authorities need to borrow to cover their costs.

Local Government borrowing can be divided into:

As when an individual or a business needs to borrow funds, Local Government will need to agree with the lender a series of terms, such as:

The decision to borrow must be taken by the full Council and it may borrow from any willing lender. In practice Local  Governments borrows:2 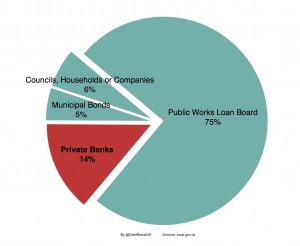 Some Local Authorities also issue municipal bonds. Bonds allow Councils to raise substantial sums of capital immediately, but can be risky if the Local Authority becomes unable to repay the bonds when they mature. Inability to repay bonds was one of the (many) causes of the recent high-profile bankruptcy of Detroit City Council.

Municipal bonds were used regularly throughout the early and mid-20th century, but fell into disuse during the 1970s and 1980s, when the PWLB became the main source of borrowing. The ability to issue bonds regularly is currently available to only a handful of Authorities. The Greater London Authority (GLA) and Transport for London (TfL) have issued bonds in the last few years, but not Councils. The GLA and TfL have access to substantial revenue streams compared to most Local Authorities, so their borrowing capacity is significantly higher. 3

From April 2015 Local Authorities also have the option to borrow from the Local Capital Finance Company (LCFC) a Municipal Bonds Agency 4 which aims to become an intermediary for:

The LCFC aims to lend to Councils at a lower rate than either the PWLB, or other Councils if they were to issue their own bonds. Priority for borrowing from the agency will be given to those Councils that are shareholders in the company, while non-shareholders will be charged a premium to borrow.

There is another form of financing used in Local Government called Private Finance Initiative (PFI) that involves setting up a partnership with the private sector to finance, construct and maintain public services. PFI financing is complex, both in the way it is set up, it uses complex derivatives, and it impacts local government finances. We will not cover PFI finance here, as we intend to dedicate a specific pamphlet to this topic, so all data we refer to will exclude this kind of debt.

For borrowing from private banks see the next section on LOBO loans.