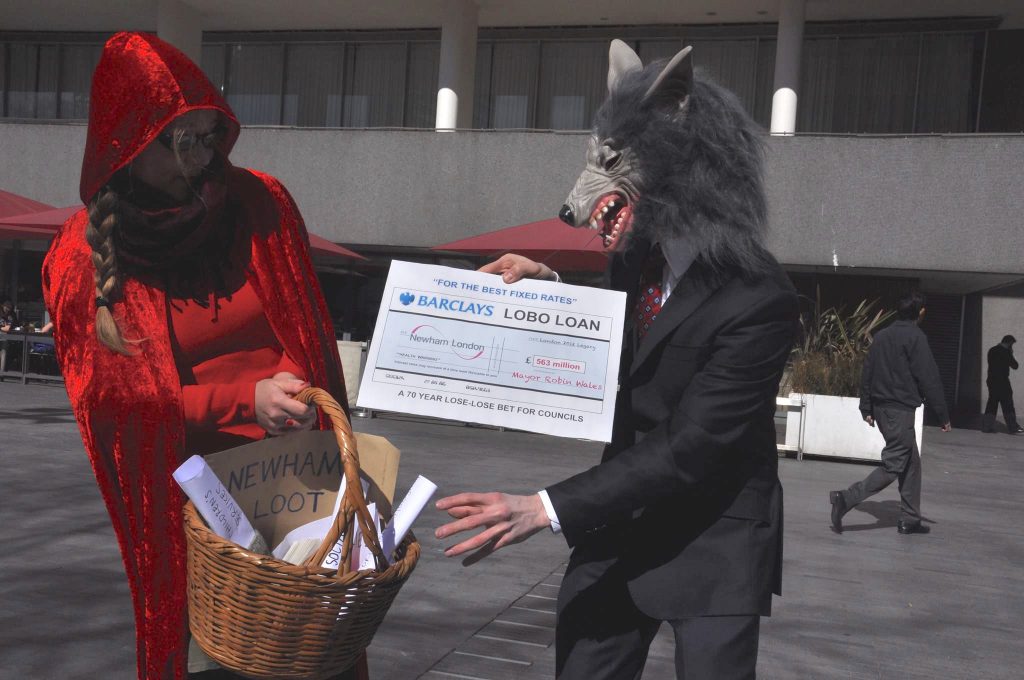 In an unprecedented, nationwide action, the 24 objections lodged by residents throughout July and August under the 2014 Local Audit and Accountability Act force council auditors (PwC, KPMG, Deloitte, EY, BDO, Grant Thornton) to investigate why councils chose to take out risky, derivatives laced loans from banks at high interest rates, when they could have borrowed directly from Government, with significantly less risk? 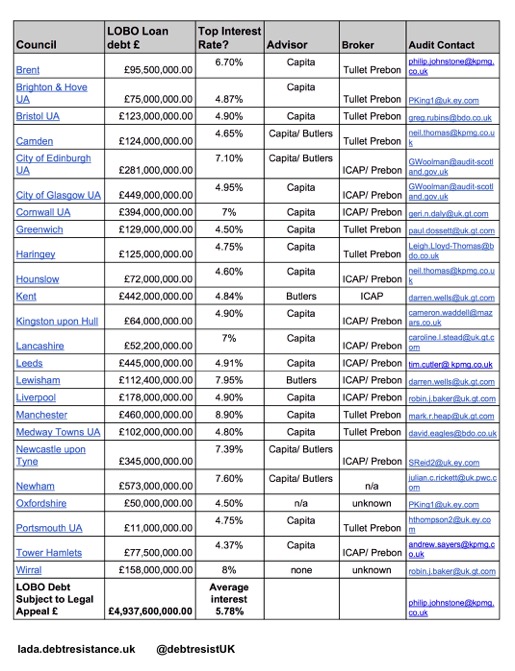 People have Objected to LOBO Loans – What Happens Next..?

Auditors at these 24 Councils will now decide whether to undertake a Public Interest Report into the decisions by Councils to borrow £5bn via LOBO loans (1/3 of the UK total), and/or to refer the cases to the High Court, to test whether LOBO loan borrowing is “irrational” and therefore illegal.

If the High Court rule that borrowing via LOBO Loans was irrational – the loans are likely to cancelled – affecting up to £15bn of council debt, as happened with the 1989 Hammersmith and Fulham interest rate swaps case (see below).

The National Audit Office (NAO) are also making separate inquiries into LOBO loans, and are working with the external auditors to gather and interpret evidence.

The Room 151 blog (a publication for council finance officers aka section 151 officers) published a response suggesting Councils are preparing to “resist” the objections – and claims that LOBO loans amount to “irrational” expenditure. 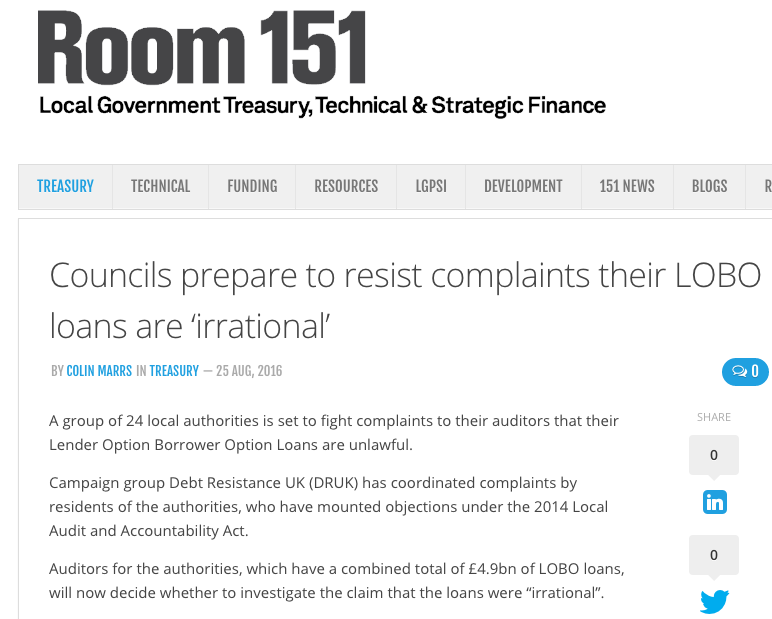 The language used by the Councils and Room151 publication in response to the objections is revealing.

The local objectors, through their letters to the council and its external auditors sought to highlight the fact that CAPITA and Butlers, appointed financial advisors to these councils known as Treasury Management Advisors (TMA), rather than providing objective, “independent” advice to the councils on borrowing decisions, were simply acting in a manner consistent with lining their own pockets.

The advisors received undisclosed kickback payments from banks and brokers totalling millions of pounds, meaning advice was skewed heavily in favour of borrowing from the City, not from Central Government, which involves significantly lower risks for councils and taxpayers, yet generates no commissions for the brokers and advisors.

Whilst council finances officers must share some of the blame for borrowing via LOBO loans, in most cases we have seen (20 out of the 24 cases listed above) councils were advised by either CAPITA or Butlers (part of ICAP group) who were on the take, meaning councils were provided misleading financial advice, and therefore have strong legal grounds to sue the advisors and brokers to recover taxpayer losses.

The Return of Hammersmith and Fulham vs Goldman Sachs 1989. Speculation is illegal

The objections raise the prospect of High Court legal battles, rekindling memories of when Hammersmith and Fulham and 137 other UK councils in the 1980’s took out speculative  interest rate swaps from US and UK banks.

Hammersmith residents complained to the Audit Commission and a series of legal cases ending in the House of Lords, ruled the swaps contracts to be ‘ultra vires’ or illegal, because councils should not be speculating with public money. The deals were torn up, and the debts cancelled.

Of particular concern are the legally suspect “range LOBO” product offered by Barclays and “inverse floater” LOBO loans sold by RBS. These loans were effectively crystal ball induced bets on interest rates by banks and council finance officers, loans now costing councils 7-8% in annual interest, when base rates are near zero, and loans from the Public Works Loan Board are available for less that 2%.

Rather than taking legal action against the banks, brokers and advisors to recover millions in taxpayer funds in brokerage fees and higher interest payments based on fraudulent advice on LOBO loans and rigged LIBOR interest rates, councils are instead preparing to “resist” the objections, challenging issues raised by local residents.

Surely it is preferable for local government to publicly admit when they have made mistakes or been defrauded by their financial captors, rather than wasting more staff time and taxpayer resources – by doubling down on a series of bad bets in a vein attempt to keep financial incompetence in-house, suppressing damaging media stories from hitting local headlines?

The only ones benefitting from the present situation are the external auditors – who failed to notice the LOBO loans issue in the first place, and are now to be financially rewarded with more public funds for investigating the objections.

External auditors now effectively mark their own homework at these Councils, after Eric Pickles closed the Audit Commission in March 2015 (which used to undertake this work as an independent Government body) as part of his package of ill considered austerity cuts.

A statement from one of the auditors, KPMG, said: “We can confirm that we have received a number of objections in relation to local authority accounts.

“As part of our role as auditors and, in accordance with National Audit Office guidance, we are in the process of considering these objections.

“We will then respond directly to the objector and the local authorities.”

The whole audit system is beset with enormous conflicts of interest – which are ignored by Government and financial regulators.

You can read more on the back story of Conservative party donations from the big 4 accountancy firms and the conflicts of interest associated with local government audit here.

Why This Matters? – Councils Are Raising Council Tax Whilst Cutting Local Services

For the past 6 years, councils have been passing down savage cuts to the poorest in society, using bailiffs to violently recover debts from the working poor, claiming they have “no other option.”

Debt Resistance UK research shows councils do have options, but councils are instead making the political choice that citizens wear the costs of the banking crisis, not the banks that caused it.”

In practice, this means councils like Newham with £573m in LOBO loan bank debt now find that the equivalent of 80% of their local council tax revenue is eaten up by debt interest repayments. More money is spent repaying interest to Barclays and RBS than is spent on social housing or public health. 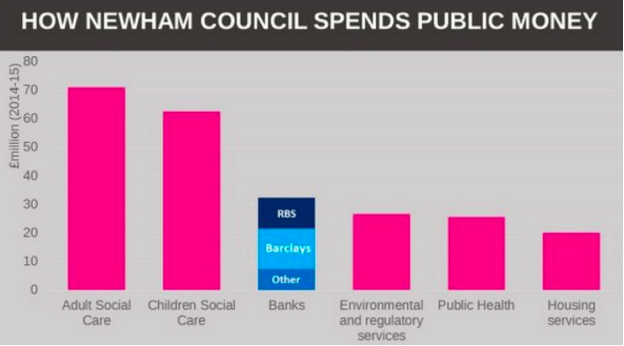 Debt Resistance UK are calling for full transparency over how public money is being spent and an end to CAPITA lining their pockets through fraudulent financial advice at the taxpayers expense.

240 Councils around the UK now find themselves trapped into LOBO loans, with breakage costs greater than 90% of the loan face value and increasing further as base interest rates drop – yet these enormous breakage costs and the financial risk they pose to council budgets are not currently shown in the councils annual accounts?

Comparatively, the breakage cost on Government Public Works Loan Board (PWLB) loans is just 30% of the loan face value.

A significant proportion of the £15bn in LOBO Loans taken out by councils amounts to “irrational expenditure” and should be cancelled, freeing up councils to refinance at lower rates of interest, making funds available for social housing and maintaining public services.