Are private bank loans forcing the gentrification of E15?

The home of the London 2012 Olympics, the London Borough of Newham, has a significant debt problem, with private bank debts totalling almost half a billion pounds.

Instead of an Olympic legacy, Newham council is dealing with a property bubble and debt burden, indicative of the problems that occur when private sector finance increasingly dictates the running of public institutions.

Newham council has been in the news a lot lately; it has one of the highest rates of poverty of any London borough and the harsh austerity cuts resulted in the council evicting the Focus E15 mums from social housing in 2013. 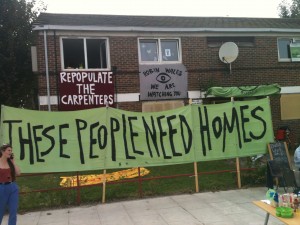 Austerity and the plight of Focus E15 mums

At “The Spark” event on social housing earlier this year, I heard first-hand of the ongoing struggle of Focus E15 mums, who had been evicted by Newham Council and were facing intercity relocation, or long waits in London temporary accommodation while queues for social housing continue to grow.

Focus E15 mums have a simple demand: “social housing, not social cleansing”. And they need our support.

Newham Council cut funding to the Focus E15 mums’ accommodation in August 2013, saving the council a token £41,000, but forcing the East Thames Housing Association to serve eviction notices. The young women are now on waiting lists, in temporary accommodation with young children and uncertain futures.

Twelve months after the evictions, the protests continue with the E15 mums now reoccupying the vacant Carpenters Estate to establish a social centre and attracting the attention of the mainstream media and Russell Brand.

Newham, responding to the occupation, sent staff to disconnect the water mains, damaging pipes in the process [according to Thames Water] and denying a basic human right to the young mothers and their children.

When I called Newham Council and Carpenters TMO (which administers the estate) on 26 September, to ask who authorised the shut-off, they denied all knowledge. Yet you can clearly see a Newham London van in this photo (@jcketc). 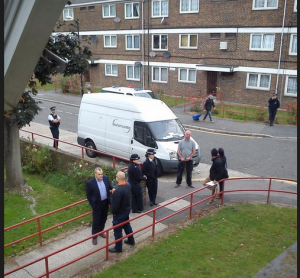 Councils like Newham have faced central government budget cuts of some 35% since the coalition government came into power in 2010 and frontline service reductions have been inevitable. But what the Focus E15 mums are publicly demonstrating is that local authorities are no longer serving local people in need of social housing. Instead, councils are siding with corporations, property developers and the bank speculators that caused this austerity and our boom and bust housing crisis.

Given the “all in it together” narrative that emerged post-2008, you would expect councils to be sharing the central government-driven cost savings equally with those that caused the crisis – the banks. You would be wrong.

When Newham Council was asked to provide 27 financial contracts for the staggering £488m in bank loans Newham had borrowed from Barclays, RBS and Bank of America (among others) via FOI request, it refused to hand them over, citing “commercial sensitivity”, despite the intervention of BBC journalists.

Newham’s borrowing spree, via controversial “lender option, borrower option” LOBO loans, coincides with Mayor Robin Wales tenure at the council, which began in 2002. As at 2012/13 , it had the highest level of LOBO loan debt of any local authority in the UK, with £488m outstanding.

A LOBO is a “teaser rate” loan, designed to initially sweeten the deal, featuring interest rates that can be periodically “called” higher by the bank, meaning the potential for 40-50 years of variable interest pain.

What is perhaps more outrageous is that Newham’s outstanding LOBO debt in 2014 mysteriously dropped to £398m. Falling £90m, at a time Newham claims to have no money to fund social housing for the Focus E15 mums?

Where exactly did this extra £90m come from that the Council used to pay down its LOBO debt?

At Brent Council where a similar £10m LOBO loan from RBS was analysed, it was found the council was paying £1.2m more for the loan from RBS, than if it had borrowed via the UK Treasury Public Works Loan Board (PWLB) – standard practice for councils. To exit the loan would cost Brent a further £3-4m in “break penalties”.

HM Treasury public sector guidelines explicitly state: “Public sector organisations may borrow from private sector sources only if the transaction delivers better value for money for the public sector as a whole.” The Treasury was asked for comment but has yet to respond with its opinion on the Brent and Newham loan deals.

Given Newham is refusing to disclose the the loan contracts, it is not possible to determine whether the loans represent better value than the PWLB. Were we to assume the £488m Newham LOBO loans are as bad as Brent’s, the council could be paying £59m extra interest to the banks – taxpayer money that should be funding social housing construction and public services, not lining bankers pockets.

Local authorities were advised by treasury management firms, such as Sector and Butlers, to hold no more than 20-30% of their borrowing portfolio in variable rate LOBOs, with the majority held in fixed-rate Treasury PWLB loans.

The £63.9m borrowed from the PWLB represents just 13% of Newham’s loans, while borrowing £488 million in LOBOs – 87% of its funds and three times the recommended limit. 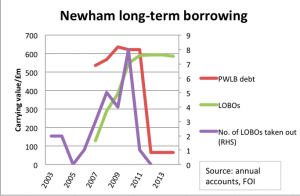 The risk for Newham is that with such a high proportion of variable rate debt, an uptick in the Bank of England base interest rates, or market instability, could result in LOBO loans being called higher, forcing it to find more money for repayments.

Unfortunately, Newham Council is not alone – 63% of councils in the UK have LOBO loans, though few have the high levels of debt that Newham does, making the decision to suppress the FOI requests for the loan contracts all the more suspicious. 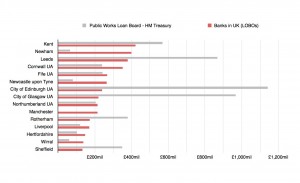 HM Treasury and the PWLB

Historically, councils have borrowed to fund social housing construction via 50-year fixed-rate loans from thePWLB (recently at between 3-5% interest). However, this arrangement meant council debt showed up on central government accounts.

Local government financial experts have complained to HM Treasury that PWLB has recently failed to pass on current low base interest rates to councils.

When George Osborne took office in October 2010, he increased the margin payable on PWLB loans to councils from 0.25% to 1% above the gilt rate – a move designed to net the Treasury an extra £1bn a year at the taxpayers’ expense. In the financial year 2013/14, the PWLB reported profit of £2.8 bn. Local authorities currently owe around £63bn to the PWLB. 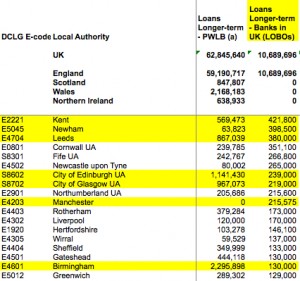 Meanwhile, George Osborne has handed billions to the banks at near zero interest rates under the funding for lending scheme. This scheme is supposed to support SME lending, even though banks are not lending to SM’s and are in effect, net borrowers from the UK economy.

The theory goes HM Treasury maintained higher than necessary interest-rate margins on PWLB loans to councils to either a) incentivise use of bank lending alternatives and/or b) boost its own profits at the taxpayers’ expense.

In 2007, HM Treasury/PWLB retrospectively changed the interest rates payable on existing loan contracts, a move that cost councils like Birmingham with large PWLB debt portfolios tens of millions of pounds. The net effect of this action is that local authority clients do not trust the government to deliver fair-price lending to councils.

Enter the City of London and financial chemistry

Local authorities responded to HM Treasury tinkering by borrowing from private banks, with the City of London more than willing to fill the funding gap left by the PWLB. Think of the City of London banks in this saga as the chemists in Breaking Bad. The cooks have just developed a new batch of drugs called LOBOs, which embed interest-rate derivatives of a type many people thought illegal in the UK following a landmark 1989 Hammersmith and Fulham vs Goldman Sachs ruling.

We all know illicit drugs are illegal. But drugs are only ruled illegal once discovered and tested by authorities, and placed upon a banned substances list. Chances are, as an enterprising drug dealer, should you get caught with a new drug, you are unlikely to face a criminal penalty.

A similar dynamic known as “regulatory front running” applies in finance. With public sector finance unregulated by authorities, the financial alchemists run little chance of ever being caught, let alone being prosecuted. In fact, chances are with the UK’s notoriously lax financial laws, none of what they have done is remotely illegal.

For their part, local authorities are deemed to be “sophisticated investors” with professional treasury and financial managers. They should have obtained professional advice and/or known better.

Who is to blame in all of this?

Up until 2010, private financial firms that advise local authorities where and how to borrow and invest billions of pounds of public money were unregulated by the Financial Services Authority.

These firms, such as Butlers, Sector, Stirling and Arlingclose, are relative unknowns, even in the financial world, but sell themselves as “independent” treasury management advisers (TMS) to councils, universities, police and fire authorities and councils. They are nothing of the sort.

Few had ever heard of TMS firms until the banks crashed in Iceland and it was found more than £1bn of public deposits was at risk, placed in high-yielding Icelandic accounts. The firms responsible for the dodgy Iceland investment advice – Butlers and Sector – are the same firms that advise councils like Newham on taking out LOBO loans. That isn’t the half of it.

Butlers is a subsidiary of the inter-dealer broker ICAP, run by former Tory treasurer Michael Spencer. ICAP offered itself as a ‘fully integrated business’, meaning you could on one hand, expect to receive “objective” investment advice from Butlers and then arrange, legally or otherwise, to execute the council loan or investment trade via parent firm and broker ICAP, earning profits for the firm on both sides of the trade. ICAP has since been fined for rigging the LIBOR and is central to ongoing investigations into rigging of the global ISDAfix benchmark. 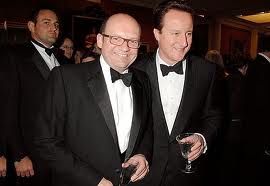 Sector (a subsidiary of outsourcing firm Capita), on the other hand, had an undisclosed relationship with broker Tullet Prebon, run by Tory MP Michael Fallon.

In both cases, Capita and Butlers would attempt to ensure that their relationship broker received the local authorities’ exclusive trade, meaning added profits for the firm but compromising the competitive bid process, designed to protect taxpayers from being ripped off.

Former Barclays Capital trader Rob Carver told me the commission payable to brokers on LOBO trades was up to 1% of the total loan value. This means that on £488m of Newham LOBOs, brokers at ICAP, Tullet Prebon or RP Martin have walked away with around £5m of council taxpayers’ cash for making a few telephone calls – cash that would not have been skimmed from taxpayers had the council borrowed from the PWLB.

For the full story on what is happening with Newham’s LOBO loan book, and why its 2014 debt levels have mysteriously dropped, the council must disclose the loan contracts, as requested via FOI, contracts that are clearly in the public interest.

HM Treasury should step off the fence and make its opinion publicly known on LOBO loans, and reconsider the unnecessarily high margins on PWLB loans, which are deterring borrowing and house-building by local authorities.

Given Newham’s general contempt for democracy, an Information Commissioner’s Office referral to obtain the LOBO loans and TMS financial advice will now be necessary.

In the meantime, Newham will pretend there is not a problem and the Focus E15 mums and 24,000 other residents in waiting for social housing will continue to organise among their community to provide the services and care that Newham is failing to deliver its residents.

Thanks to Ranjan Kumaran for invaluable FOI research on this story.

4 thoughts on “Newham Council and the LOBO loan scandal”