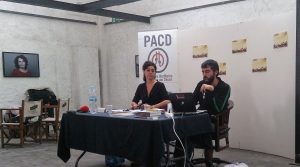 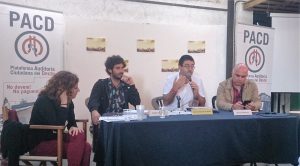 On the 14th and 15th October, Debt Resistance UK participated in an event in Barcelona called #AuditFest, a coming together of social movements and progressive political groups. The event was organised by the Citizens Debt Audit Platform PACD and its focus was on auditing municipal debt, but discussions also left space for other participatory forms of politics.

The municipal elections in 2015 changed the political landscape in the Spanish state: in many councils, progressive citizen platforms gained power, starting to action politics of participation in the office. One of the initiatives picked up by these political groups has been citizen debt audits to examine the legitimacy of these councils’ debts, which repayments are draining resources from social spending. Citizen debt audits have been worked on by social movements since the onset of the crisis.

One of the cities where power shifted from decades of conservative rule to a coalition of new progressive forces is the capital, Madrid. Since last year, Ahora Madrid – who despite having power in the council are in a minority so have to balance their political actions to get support from the old social democratic PSOE – have been designing a debt audit process at the council level.

A change in the Spanish constitution in 2012 forced local authorities to prioritise debt payments over social spending. In practice, many councils are disobeying this legislation, but Madrid – the most indebted city in Spain and in the official discourse cherished for reducing its debts – could be the first one to make their opposition official. This is the context for the audit that is examining the origins of the city’s debt, but the aim of non-payment has not been officially spoken.

Madrid’s audit is an important enquiry into transparency in council spending, which also has to be the start for any demand of non-payment. In the convergence workshops, there was a lot of discussion on the different stages of an audit process: first, transparency is needed to determine what debts there are. Then, their legality can be examined, and finally illegitimacy. PACD Madrid would like their council’s technical audit to lead to a referendum on whether or what debts are illegitimate.

The roles of different actors were also discussed: an audit involves finding and analysing data, then disseminating information until a final stage of taking action can be reached. The first stage is technical work, and finally any referendum or other action towards non-payment has to be done by an official body, but educating the public can and has to be a joint effort. That is also where social movements come in to ensure the audit is done in a participatory manner.

Audits can also be done on a sectoral level: one of the groups presenting at Audit Fest was Madrid-based Audita Sanidad who work towards an audit in the healthcare sector. The aim is to identify where resources that should go into health services are flowing to the private sector – one of the forms of illegitimate debts they are looking into is the Private Finance Initiative model imported from the UK.

One of the recurring themes over the two days was how the work on debt audits has enabled citizens to learn about their local democratic institutions. This has also been in the heart of our work on exposing the LOBO loan scandal and supporting local residents’ objections across the UK, which we spoke about on the panel on international experiences.

What is inspiring about the groups in the Spanish state is that they have got further than using existing institutions to pursue democracy; they have created tools for participation that are widely used.

Similarly to Madrid, Barcelona last year was taken over by a party formed from grassroots movements, Barcelona En Comú. One of the tools they have developed to increase participation in the city is Decidim Barcelona.

With the idea that technology has a lot to give to participatory processes – “many people carry internet in their pockets” – the group behind Decidim have created an online tool where anyone can make proposals, support them and discuss the official municipal plan for Barcelona.

Launched in February, the platform has had quarter of a million visits and 25,000 people have participated in decisions. The site encourages people to reach out to their social networks: it is easy to share the initiatives of Decidim on social media.

Another Catalonian council, Santa Cristina d’Aro, is experimenting with participatory budgeting. Recognising that resources are limited and therefore spending decisions have to be prioritised, the aim is to use public funds for public interest, in an efficient and transparent way. Assemblies – by neighbourhood or thematically – decide the priorities. A team of technical council officials then feed back on what is feasible, and the decisions are again referred to the assemblies.

Santa Cristina d’Aro only has some 4,500 inhabitants, which makes fostering participation easier. But the same model can work in a different context, too: participatory budgeting was first rolled out in Porto Alegre, Brazil, home to 1.5 million people. Although only one in ten participated in the process, 70 per cent of residents were happy with the decisions they yielded.

What precisely is illegitimacy?

The creators of Decidim Barcelona describe the response from politicians to their initiative as mixed: although saying they want participation, they are often scared when it actually happens. But their words encapsulate the change that has taken place throughout the Spanish state: “It is too late to return to old politics.”

The two days of Audit Fest show the strength of the movements working on municipal policies, participation and debt audits within the Spanish state. But the final discussion reveals that big questions still remain unanswered: who decides what is meant by illegitimate, and how is that consensus reached? The organising group PACD thinks of debt in a holistic way, including the social, gender and environmental impacts, not just in economic terms.

Illegitimacy in terms of social justice is harder to quantify than technical illegalities, but that is exactly why these conversations are important. With citizen objections to LOBO loans pending in over 20 councils across the UK, it is time we start to discuss what we mean by illegitimate debts.