On Thursday 22 September, as Liverpool was gearing up to host the Labour 2016 Conference, Liverpool City Council’s Audit and Governance Committee met to scrutinise a series of big ticket financial decisions made by the Council, and the progress of external auditors in running over the fine print of the councils annual accounts.

On the meeting agenda, which can be viewed here, councillors were to consider the findings of the council external auditor – Grant Thornton, who had been scrutinising the draft 2015/16 annual accounts.

Debt Resistance UK were interested in the meeting because Liverpool City Council – which has borrowed £170 million in LOBO loans from the banks is one of 24 local authorities around the country where residents have lodged legal objections against the council because of its excessive and risky borrowing from banks.

The citizen objection to Liverpool’s LOBO loan borrowing is mentioned on page 7 of the Grant Thornton report, which says:

During the audit meeting, which was attended by Robin Baker – the Audit lead for Grant Thornton, at approximately 12 minutes, 40 seconds – you can hear Liverpool Finance Director Becky Hellard comment on the value for money of the LOBO loans taken out by the Council.

“And then on the LOBO one, … we remain confident that the agreements that were entered into in the previous financial years … did represent good value for money. They were at lower rates than the PWLB loan board offered at that time and we have got the ability to leave them at any stage without any penalties. So whilst this is all going on, I want to reassure members that we are actually not concerned about them as professionals.”

If Director Hellard wants to label herself a finance “professional” then she is either an incredibly incompetent, or poorly advised one…

Rather than being “able to leave the loans at any stage without penalty” as Becky falsely suggests, LOBO loans are subject to punitive “break penalties” which keep the Council locked into paying higher interests rates and unable to refinance, as interest rates have continued to drop since 2009.

Debt Resistance UK pulled up a sample of Liverpool’s 8 LOBO contracts – and this is what the contracts state regarding early repayment of the loan contracts by the Council.

The reality of current market conditions is that no bank would ever choose to increase the rate payable on a LOBO now, when they have the council currently paying 4.9% and prevailing market interest rates are just 1.5-2% – meaning a profitable 2%+ interest rate premium being paid by the council to the bank.

It is clearly in the banks interest to keep the Council locked into paying the higher rate for the next 50 years, and not to allow the Council to refinance the loan today at 1.5-2% interest.

As the contract states in section 5 (b) it is only if the bank increases the interest rate, that the council can repay the loan without “early redemption penalties,” and therefore in any other circumstance break penalties WOULD apply.

The Council’s own annual accounts (see screenshot below from page 88 of annual accounts) state: “these [LOBO] loans all have call options within the next 5 years, however it not anticipated that any of these will be called and require repayment” – so if the loans are not expected to be called by the banks, any early repayment by Liverpool will be subject to a break penalty.

Finance Director Becky Hellard is wrong – and has either never read the loan contracts, or has set out to mislead the Audit Committee.

How much are the early redemption penalties on LOBO Loans you might ask? – well on a sample of LOBO contracts analysed by Abhischek Sachdev of Vedanta Hedging in evidence to the 2015 DCLG inquiry on local government bank loans, exit penalties on LOBO loans were found to be around 90% of the loan face value/ principal amount, compared to an average of just 30% on a comparable loan from central Government.

If you took Liverpool’s £170 million of LOBO loans, and asked the banks for the cost of repaying them today – the total cost would be around £320 million, nearly twice the amount originally borrowed.

At Wirral Council – the cost of repaying LOBO loans with a face value of £100 million is a staggering £259 million!

Rather than being allowed to “repay the loan anytime – without penalty” as she falsely claims, Finance Director Becky Hellard would find herself searching down the back of the sofa for a spare £150 million – something no council has lying around in the context of austerity and 60% cuts to Government grant funding. 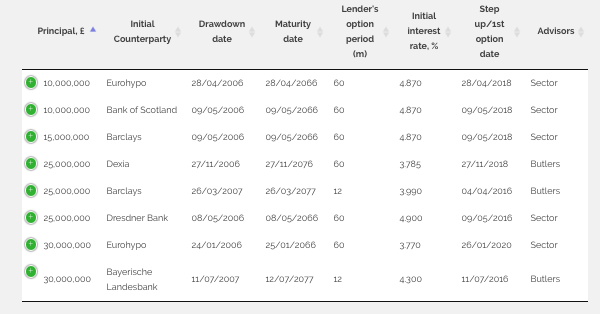 This brings us to the issue of corruption and CAPITA as conflicted advisors.

Liverpool City Councils financial advisors in the above table are Sector (part of CAPITA), who advised the Council on entering LOBO loan agreements as an “independent” “Treasury Management Advisor”.

Whilst profiting from financial advice to Liverpool council, it is a matter of public record that CAPITA were secretly taking thousands of pounds in undeclared kickback payments from the banks and brokers involved in LOBO loan trades.

In response to the following questions from objector(s)

Q: How does Liverpool City Council monitor the exit/break cost to enable early repayment of its Lender Option, Borrower Option loan portfolio and where is this shown in the annual accounts?

CAPITA responded A: “Liverpool City Council are not required to include such cost details in the Statement of Accounts”

Regarding the actual value of the LOBO loans – CAPITA said:

The fact it’s the same company (CAPITA) responsible for valuing the loans with the auditor – that recommended the Council borrow via LOBO loans in the first place is apparently not worthy of mention. Seemingly in the unregulated world of council finance – theres no such thing as a conflict of interest!

The Liverpool Draft 2015/16 accounts are rather opaque when it comes to the cost and value of its LOBO loan portfolio, in a 200 page annual report, there is only one small mention of LOBOs on page 88.

What the the accounts have done is merged the £170 million of LOBO loan debt with other PFI and Public Works Loan Board debt liabilities, making a meaningful comparison of market value and interest rates for each type of debt all but impossible.

Nick Dunbar has charted interest payments on LOBO loans for several Councils for his website RiskyFinance. When you plot the interest payments for Newham, Wirral and Cornwall Council – you observe a familiar pattern – even if the extremes vary. 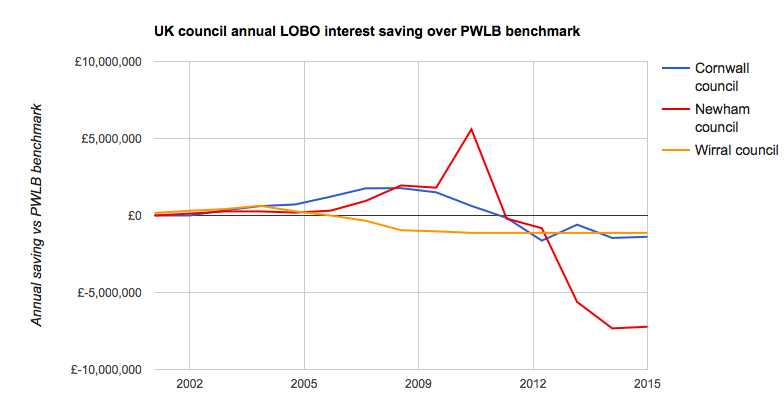 For the first few years during the low “teaser-rate” interest period, the LOBO loans are above the horizontal £0 cost benchmark, which represents a saving to the council relative to the cost of an alternative Government loan.

Very quickly however, as the teaser rate discount period expired, and interests rates fell post 2009, the interest rates plunge below the horizontal, meaning an annual interest rate premium being paid to the banks of between £1.5million in the case of Wirral Council to £7million per year in the case of Newham Council – a situation which could continue for the next 60 years…

Liverpool’s LOBO loans were all taken out between 2006 and 2007, which is well before Ms Hellard joined the Council in 2012/13 – so there is no question of her personal liability or involvement in the original decisions.

There are however, serious questions to be answered regarding her professional competence as Finance Director, and her previous work history.

Becky Hellard is no stranger to controversy it would seem – she left her previous role as CEO of Breckland Council under a cloud of controversy – after a series of complaints regarding her conduct saw her leave her role under a gagging clause to keep the details of her alleged misdemeanours secret from the public.

Given Grant Thornton auditors were present at the meeting where Hellard misled the Audit Committee members, we can assume they have picked up on her mistake – but just to be sure, Debt Resistance UK intend to share this blog with Liverpool’s auditors.

The matters which Grant Thornton will investigate and consider when examining the objection on LOBO Loans are set out below:

While Grant Thornton continue their investigation into the circumstances surrounding the decisions taken by Council to borrow using LOBO loans, we think Liverpool Council and Becky Hellard have a few questions to answer regarding this matter.

We have asked the Liverpool City Council press office for a response regarding the following:

We will post the answers from Liverpool City Council onto the bottom of this blog post when and if they respond….

The City council’s responses to the questions you posed are:

Becky Hellard did not mislead the Audit and Governance Committee. Your reference is a short extract from an overview presentation of the report which covers the Audit of Accounts. That report is in Ms Hellard’s name and is explicit in the circumstances within which the City Council can exit the arrangement without penalties .It is misleading on your part to take Ms Hellard’s presentation commentary in isolation from her detailed report.

Ms Hellard  meets the requirements of both the job description and person specifications for the role of Finance Director at Liverpool City Council. Equally she meets fully all legislative requirements to fulfil the statutory requirements of this role. She also brings with her 15 years of experience in senior finance roles within local government .The City Council has full confidence in her judgement.

LCC does not accept that any false or misleading information has been given to members. The report clearly sets out on page 75 the detail of the exit provisions. However, for reasons of clarity only, a short note will be circulated to Members of the Audit and Governance Committee .

That concludes the responses to your specific questions .However , Liverpool City Council owes a duty of care to its employees and wishes to put on record its concern at the defamatory language used by you in reference to Ms Hellard and requests that your headline comments ‘ of incompetent , misled or corrupt ’  are withdrawn