Last year council tax became the biggest problem debt for families in the UK, overtaking credit card debt as the biggest strain and leading to threats from bailiffs, court action and increased business for exploitative payday lenders. As funding from central government continues to decline under austerity policies many local authorities are looking to increase their council tax rates in 2016-17 to fund social care services.

But our analysis of council tax income and interest paid on council debt suggests that councils should be looking to audit their debt and reduce their interest payments before placing extra strain on already overstretched household budgets. The chart below shows interest payments (on loans from the PWLB, banks and PFI debt) as a percentage of council tax income for each of London’s 30 boroughs (excluding the City of London). 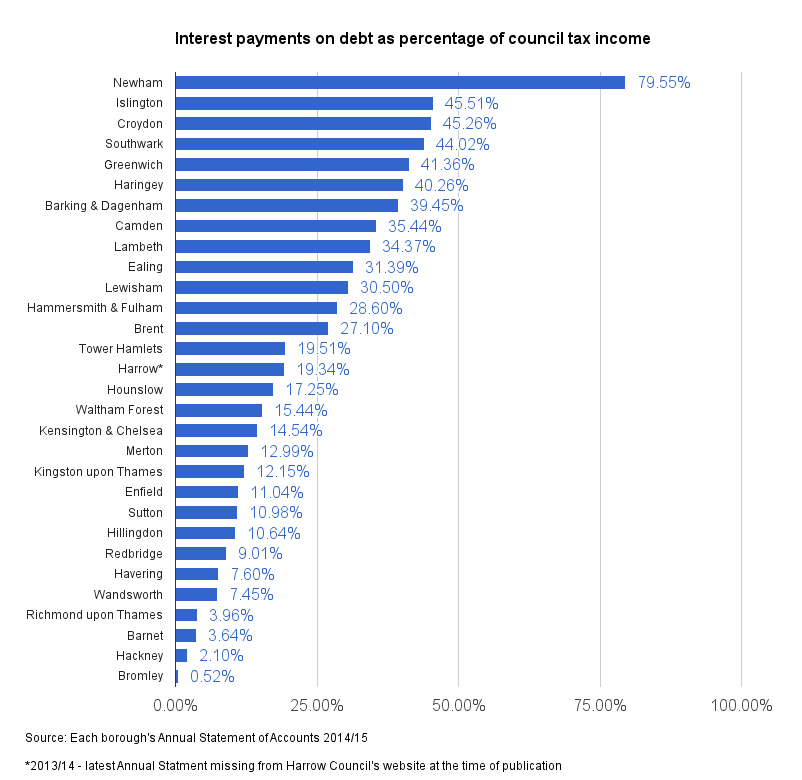 In Newham, which has borrowed £563m from banks like RBS and Barclays in the form of high-risk LOBO loans, interest payments on debt are equivalent to nearly 80% of the borough’s council tax revenue.

Lambeth and Islington, both of which are looking to put up council tax rates by the maximum of 4% this year, are spending 34% and 46% of their council tax revenues on interest payments respectively.

Across all London boroughs, the average annual cost of servicing debt is equivalent to 23p in every £1 of council tax income.

Given that many of these councils’ interest payments are the result of borrowing which was potentially irrational, illegitimate or even unlawful due to bank ‘mis-selling’ or poor value PFI contracts, shouldn’t the councils be looking to challenge some of this debt before shifting the burden onto their residents?