In March 2017, Labour Shadow Chancellor John McDonnell said in an article for the Guardian “with so much dirty money around, it’s time to make UK banks clean up their act.”

We need to clean up the City, but to do so, we need politicians taking a public stand over financial sector corruption and political influence over UK public life.

We need the biased and highly concentrated UK media to focus on the problems caused by a large and inherently unstable too big to fail banking and financial sector.

Instead, with an election just one week away – as noted by Josh Ryan Collins of the New Economics Foundation we have silence, both from politicians, and the press.

Discussion regarding reform of the City of London is simply not tolerated during election debates. The message from our elite is clear. Best leave finance policy to City “experts.”

RBS accounts for 71% of the total loans issued to political parties by the big four banks (Barclays, LLoyds, HSBC, RBS). 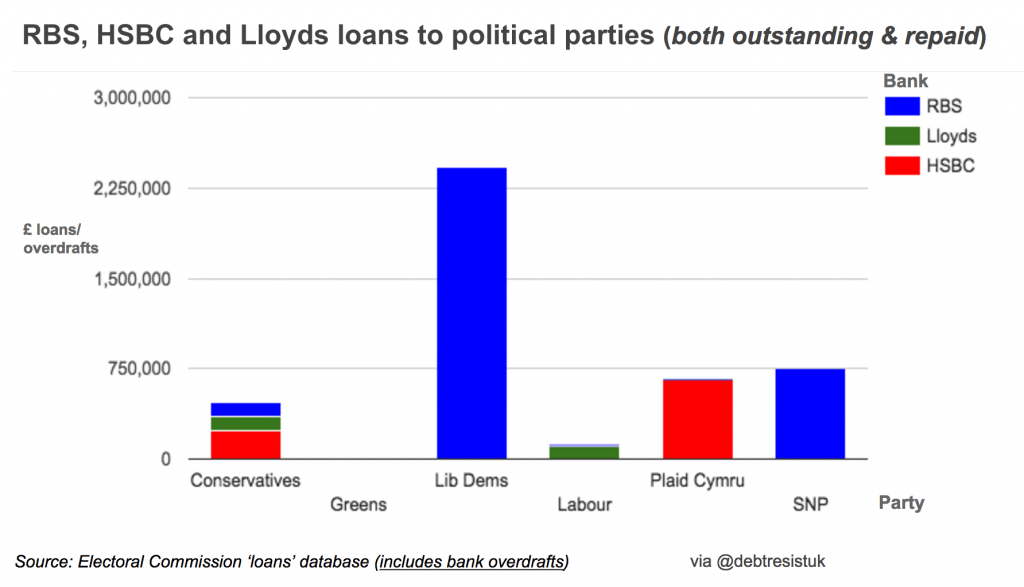 HSBC and RBS were approached for comment on the findings. HSBC said: “We are unable to comment on customers”.

RBS said: “We are politically neutral and all lending is done on a commercial basis”

In order to test public claims of ‘political neutrality‘ from the banks and the statements made by political parties borrowing from them, we had a look through the party manifestos for proposals on banking sector reform.

In particular, Debt Resistance UK looked at RBS loans to major political parties as compared with General Election 2017 Party Manifesto commitments to reform the 71% taxpayer owned zombie – RBS. Not surprisingly, those parties receiving large funding from RBS in the form of loans and overdrafts were less likely to have plans to reform the Royal Bank. 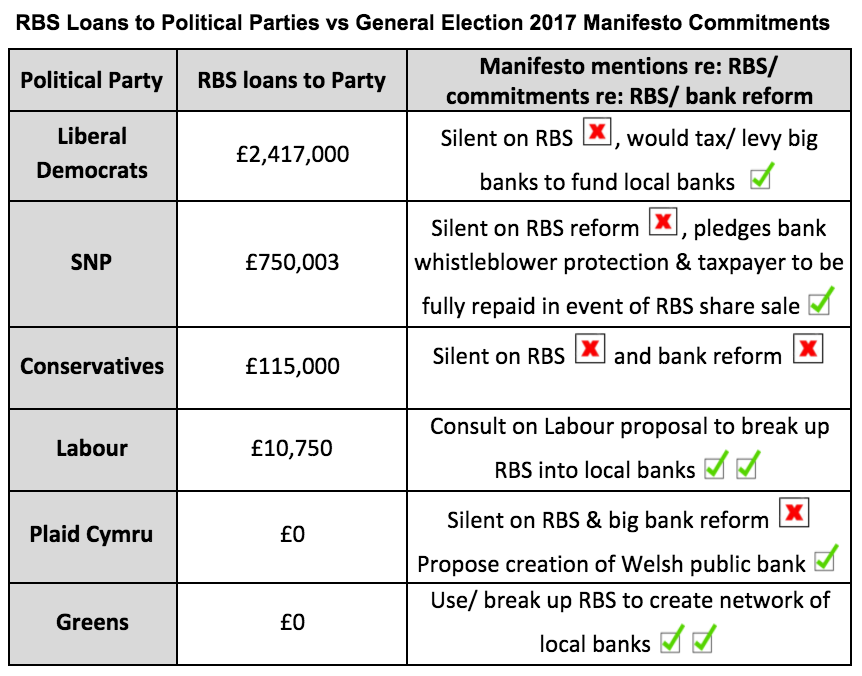 Those parties taking the most money in loans and overdrafts from RBS featured General Election manifestos which are completely silent on RBS reform.

The parties receiving least, or no money from RBS (Labour and the Greens) feature specific plans to break up and transform RBS into local banks, serving small and medium enterprise (SME) customers.

Labour would: “create new local public banks that are better matched to their customers’ needs”, from the broken-up Edinburgh-based RBS said Jeremy Corbyn.

“To expand and build on their potential and creating jobs, small businesses need to have access to fair and affordable credit. But SMEs are often at the mercy of the big four banks, who provide the lion’s share of commercial lending, yet as we have seen with HBOS Reading & RBS GRG, often fail to lend or to treat smaller customers fairly.

Whilst politicians remain in thrall to the big banks via donations and party loans, there is little hope of a banking industry that operates in the interests of its customers.

Thats why the Green party would shatter this cozy big bank cartel, and break up RBS into a network of local banks, to better serve SMEs”

Full analysis of big 4 bank lending by political party can be found in Debt Resistance UK’s latest press release and in the table below.