A leading academic on criminology and corruption and author of the books “How Corrupt is Britain” and “The Violence of Austerity” has called for an inquiry into HSBC #ToryDirtyMoney allegations in a new video on “Corruption, the election and austerity” published by Real Media GB.

Professor David Whyte is prompted by Real Media’s Ranjan Kumaran to discuss the 2017 General Election and the various themes of “collusive corruption” which characterise the background to the election campaign, including investigations into Tory Election Fraud and calls for an inquiry from MPs into HSBC and ‘Tory Dirty Money.’

Instead of acting on calls for an inquiry, the Conservative Government is moving to close down the Serious Fraud Office, the sole body tasked with investigating white collar financial fraud, in a move condemned by Transparency International UK.

The section on electoral fraud and Tory dirty money is from time signature 3:30 to 4:30 in the video.

“I do think we have a very high tolerance of collusive corruption in this country, so that breaches of electoral rules for example are not taken particularly seriously, and the most recent example we have, where there are very serious questions, about you know, a slightly different issue, not electoral fraud but the funding of political parties.

Where you have HSBC, apparently, and allegedly, being involved in laundering money, that ends up in the Conservative Party coffers, and a senior MP, and some senior journalists, are asking why this isn’t being discussed?

Then clearly, this is an indication of a vey high level of tolerance of corruption in this country.

That HSBC case by the way needs to be investigated, we are moving towards a general election, where one of the political parties has big questions over their head, not only over the last election, but also from those most recent revelations and we simply cant tolerate this without an inquiry.”

Compare and contrast this sensible and robust approach to allegations of wrong doing from a leading corporate criminologist, who believes an inquiry must be undertaken to establish facts, before conclusions can be drawn, with the manner in which elements of the UK press sought to prematurely dismiss the #ToryDirtyMoney story as “conspiracy theory.”

Then, later on 03 May at 2:41 pm was the GuidoFawkes blog, re-stating the Electoral Commissions position that it has no remit to investigate the allegations against HSBC as all the proof it needed to dismiss a story Guido characterise as a “most manifestly bonkers conspiracy theory” hatched by “Canary brained lefties.”

Two minutes later, on 03 May at 2:43 pm, Buzzfeeds James Ball publishes another piece, using near identical framing, titled “How Politicians And Journalists Pushed A Dubious Conspiracy About HSBC Secretly Funding The Tories.”

Both articles, loudly shrieking “conspiracy” deliberately ignore central components of the story, such as the fact the story actually emerged from Debt Resistance UK research and Move Your Money attendance and questions at the HSBC AGM the week prior – and involves direct questions to HSBC Bank Chairman Douglas Flint into HSBC political lobbying and corruption, not solely related to the dubious extension of the £214m loan to Michael Spencer’s IPGL Ltd in October 2008.

As I recently wrote in a response to Buzzfeed, published on Open Democracy, we should all be wary of the use of “conspiracy theory” labels to dismiss such serious allegations of HSBC’s illicit involvement in UK public life.

“One of the most divisive terms in the English language today is the phrase ‘conspiracy theory.’ Its stigma has a chilling effect on people and the label has the subtle power to shut down enquiring minds and, with them, any inconvenient conversations.”

Watch the full interview on the origins of mainstream media useage of the label ‘conspiracy theory’ in the 1970s here.

What action did state funded BBC News take, whose remit is to “educate and inform” viewers, when presented with evidence of calls for an inquiry from Senior Labour and SNP MPs, videos of Douglas Flint evading tough questions at the HSBC AGM and thousands of angry tweets from citizens under the #ToryDirtyMoney hashtag?

The BBC sought to reinforce and continue the “conspiracy theory” label, unchallenged.

The Victoria Derbyshire show on Wednesday 10 May invited on the leading conspiracy theorist, James Ball to “debunk” the story unchallenged, which Ball falsely characterises as ‘a theory which began on The Canary’ who the BBC then report as a “blog which supports Jeremy Corbyn.”

Rather than ‘a theory that began on the Canary‘, The Canary were (not for the first time), the only news platform to actually do its job and bother reporting the news on the day it happened. This should be commended, not labelled & mocked by MSM hacks.

Victoria Derbyshire, who after listening to a series of falsehoods from James Ball dismissed the allegations on behalf of the BBC as “unfounded“, made no attempt to reach out to Debt Resistance UK, Move Your Money or The Canary to canvass views from the actual source of the story. A clear and obvious breach of the most basic journalistic standards.

For those watching @vicderbyshire on #torydirtymoney, here's the detail behind what I said on-air: https://t.co/pmquphmfeQ

My complaint to the Victoria Derbyshire Show has so far received the following entirely inadequate response from the BBC: 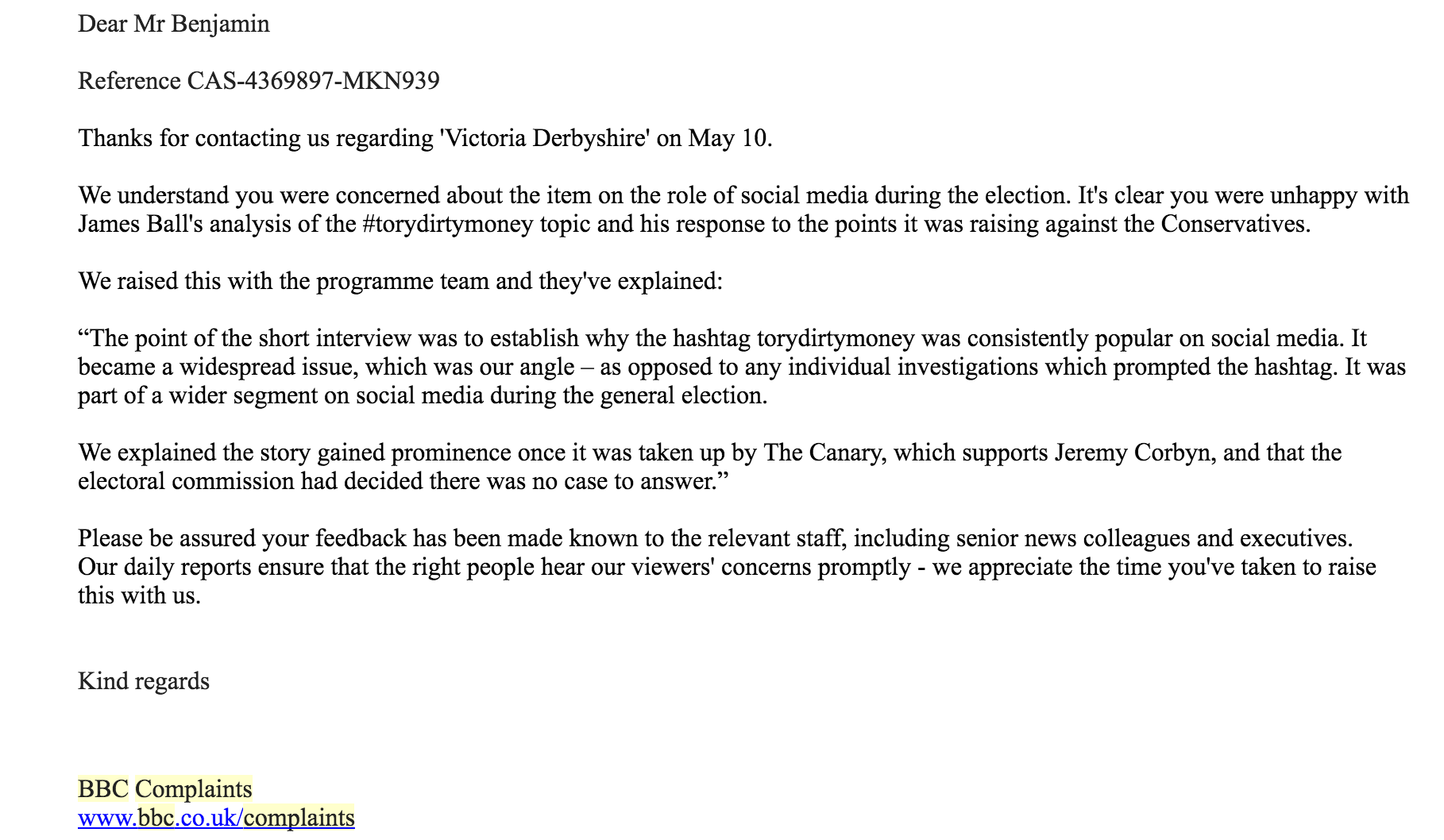